This post explains the business plan for cucumber farming in Nigeria. It explains the expected cost, expected revenue and expected profit from engaging in the growing of cucumbers.

To be a successful cucumber farmer, a thorough plan must be set out. This business plan is one of the strategies to be successful as a participant in cucumber farming in Nigeria.

Cost, Revenue and Profit Analysis of a One Hectare Cucumber Farm (₦)

FARM SET-UP FOR ONE HECTARE OF CUCUMBER FARMING VENTURE

Drip Irrigation: The cost of drip irrigation system per hectare of cucumber is N625,000.

Fertilisers: N200,000 is expected to be spent on one hectare of cucumber. Please note that your total cost on fertilisers can only be precisely known after a soil analysis. If your soil is very rich in nutrients, you may not spend a lot of money on fertilisers. Also, you should know the types of fertilisers to use at every stage of the cucumber plant.

Pesticides: N70,000 is expected to be spent on pesticides. The pesticides include insecticides, fungicides, acaricides and nematicides. Please do not buy cheap sub-standard pesticides. Do not be deceived by the cheap prices of some pesticides, they are mostly sub-standard.

Manure: N50,000 is expected to be spent on chicken manure. Some poultries allow farmers to come and take their manures free of charge. Chicken manure is very good for cucumber farming. You should ensure that the chicken manure is well cured before usage on your soil.

Hybrid Seeds: N240,000 is expected to be spent on the purchase of hybrid cucumber seeds per hectare. Hybrid seeds in my opinion are far better than open pollinated seeds in cucumber farming.

Farm Tools: N10,000 is expected to be incurred on farm tools. However, if mechanized tools are preferred, the cost will be higher. 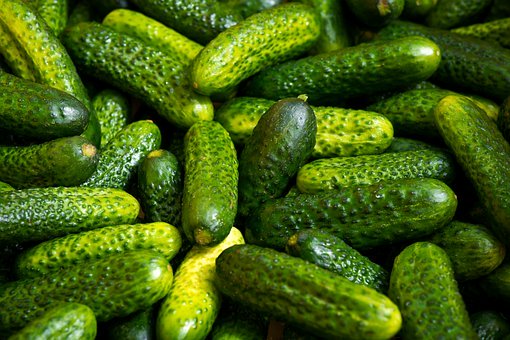 Cucumber farming is the cultivation of cucumbers from seeds to harvest. Cucumber as a vegetable is one of the most profitable three months crops in Nigeria. It also involves the marketing of the harvested fruits. Harvested cucumbers are usually sold in the open markets in Nigeria; they are also sold in the more organized markets like supermarkets and hotels.

Market Trend: Nigeria has a population of about 200 million; the country also has one of the highest birth rates in the world. This is a positive for crops like cucumbers. The huge population of Nigeria provides a ready market for cucumbers. The demand for cucumbers in Nigeria is huge; cucumbers are eaten as fruits and also used in garnishing meat, fish and salads. Some Spas and beauty stores also use fresh cucumbers for their beauty work.

The demand for cucumbers in Nigeria is constant all year round, though there are peaks during the festive periods of Christmas, New Year, Easter and Muslim celebrations. A significant percentage of the cucumbers produced in Nigeria are from the northern part of the country. Though, few southern farmers have embraced the cultivation of cucumbers.

Target Market: Mile 12 market in Lagos Nigeria still remains the largest market of cucumbers in Nigeria. On a normal day in Mile 12 market Lagos, about N100 million worth of cucumbers are sold within hours, sometimes, you can count up to 20 trucks offloading fresh cucumbers in this market. Other markets where cucumbers can be sold include large markets in cities and towns, hotels and supermarkets.

Hotels and supermarkets are likely to offer higher prices when buying cucumbers, however their demand is not as large as that of the open markets.

Competitive Analysis: About 70% of the farmers that cultivate cucumbers in Nigeria are illiterates and semi-illiterates; they do not implement good agronomic practices and often have low yields. They also farm on small acreages and also cultivate cucumbers only when there are rains, this forces them to sell their cucumbers at low prices.

To be competitive as a cucumber farming, you should use smart technologies like drip irrigation, plastic mulch, farm machines and precision meters. For example, drip irrigation will enable you to cultivate cucumbers all year round. Plastic mulch will also prevent weeds from growing on your farm.

In order to make good money from cucumber farming, you should deploy effective sales and marketing strategies. Cucumber farming does not stop at harvesting, you need to know how to sell your cucumber fruits and make good profit.

To sell through organized channels like supermarkets and hotels does not involve too many hassles. You need to visit these hotels and supermarkets and show them the samples of your cucumber fruits. If they look ok, they are likely to give you a purchase order.

Should you need a cucumber farming business plan, you may contact us through sales@veggieconcept.ng.